Published by ChrisW On January 1, 1970 Leave a response

The Yaeyama islands make up the southernmost inhabited archipelago of Japan, some 2,000 kilometres (1,242 miles) from Tokyo. This group of untouched islands offer a total change of scenery in a subtropical climate.

This is the ideal destination to unwind and experience the natural beauty of the Japanese jungle, unspoiled beaches and pristine reefs. 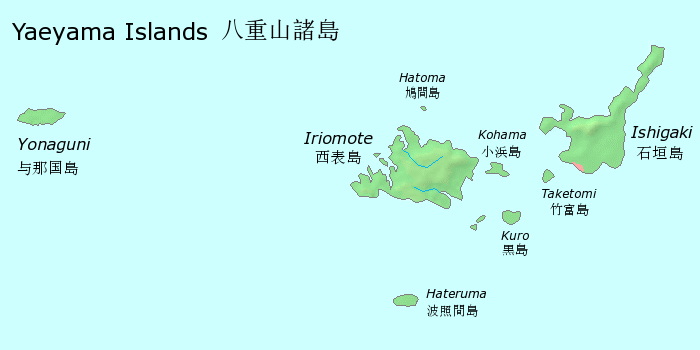 Yaeyama islands are the southernmost archipelago of Japan

Ishigaki is the most populated island of the archipelago and the transport hub, with daily flights to/from Kyoto and Tokyo airports.

Iriomote is one of the largest islands, but least populated, with only 2,000 inhabitants. With 90% covered in dense jungle and mangrove swamps, Iriomote is an adventure sanctuary.

Taketomi is one of the smaller islands, just 1km long, with stunning white sandy beaches and at its centre, a village which has maintained its traditional charm from the Ryukyu kingdom.

In order to maximise your time in the Yaeyama islands, we advise spreading your stay between Ishigaki island for the first few days, then Iriomote for the remaining period so you can explore the surrounding rainforest. 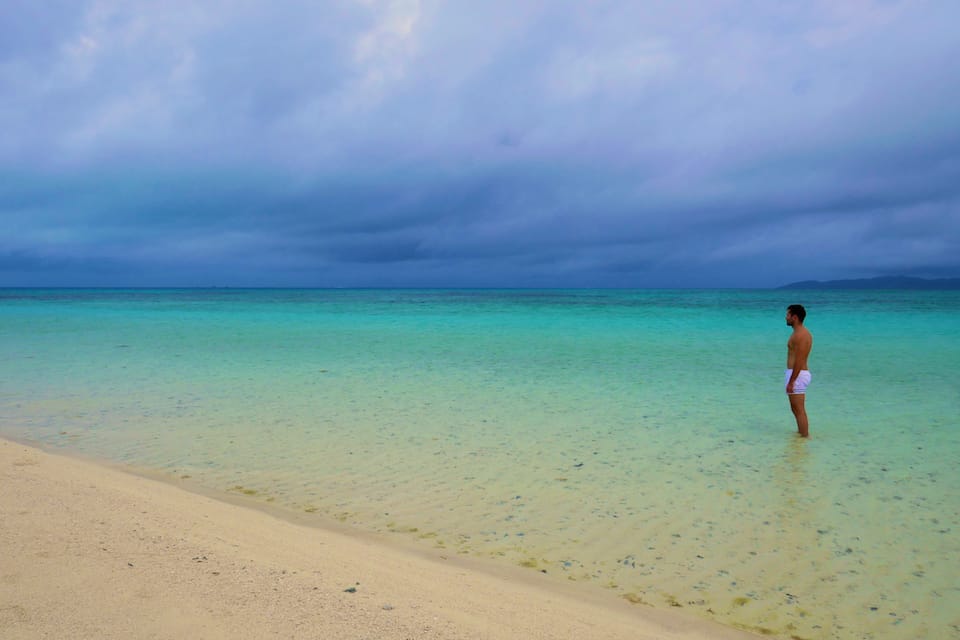 Tropical paradise in the Yaeyama islands

WHERE TO STAY IN THE YAEYAMA ISLANDS

Ishigaki is the main island most tourists base themselves on because it is the most developed and the main transport hub into and out of the Yaeyama islands. As a result it is more crowded, but will have greater variety of cultural activities, like the Yaima Cultural Village and of course more dining options.

Iriomote on the other hand is more remote, peaceful, with fewer tourists. Most come here as a day trip from Ishigaki and leave.

Where you choose to base yourself comes down to whether you prefer being close to all the action or away from it all, closer to nature. We chose to split our time between the 2 to get the most out of each island.

Where to stay on Ishigaki: 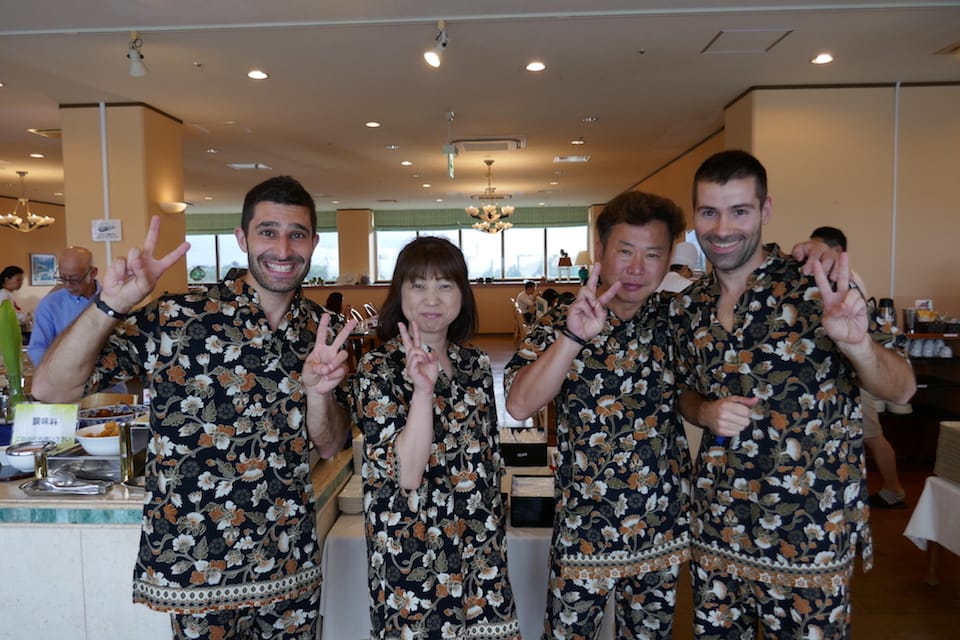 Strike a pose at the Ishigaki Seaside Hotel

Where to stay on Iriomote: 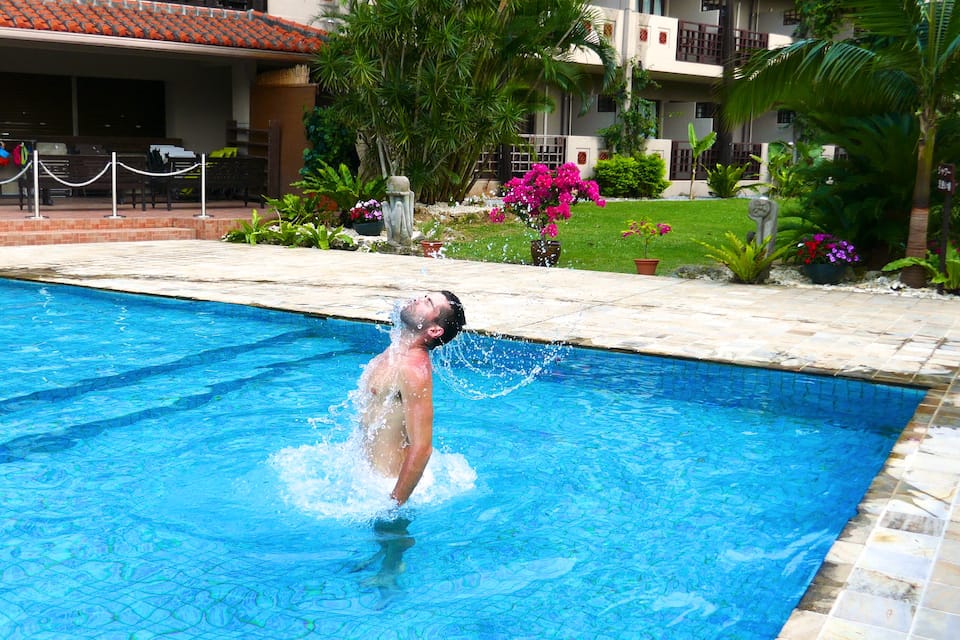 WHAT TO DO IN THE YAEYAMA ISLANDS

The scuba diving in the Yaeyama islands is the best in the whole country and after our outstanding diving experience in the Komodo National Park, we were keen to get back into the underwater world. We recommend Prime Scuba Ishigaki Diving who have an established diving shop on Ishigaki island and speak English.

Some highlights from snorkelling and scuba diving in the Yaeyama islands include:

2) Things to do on Ishigaki island 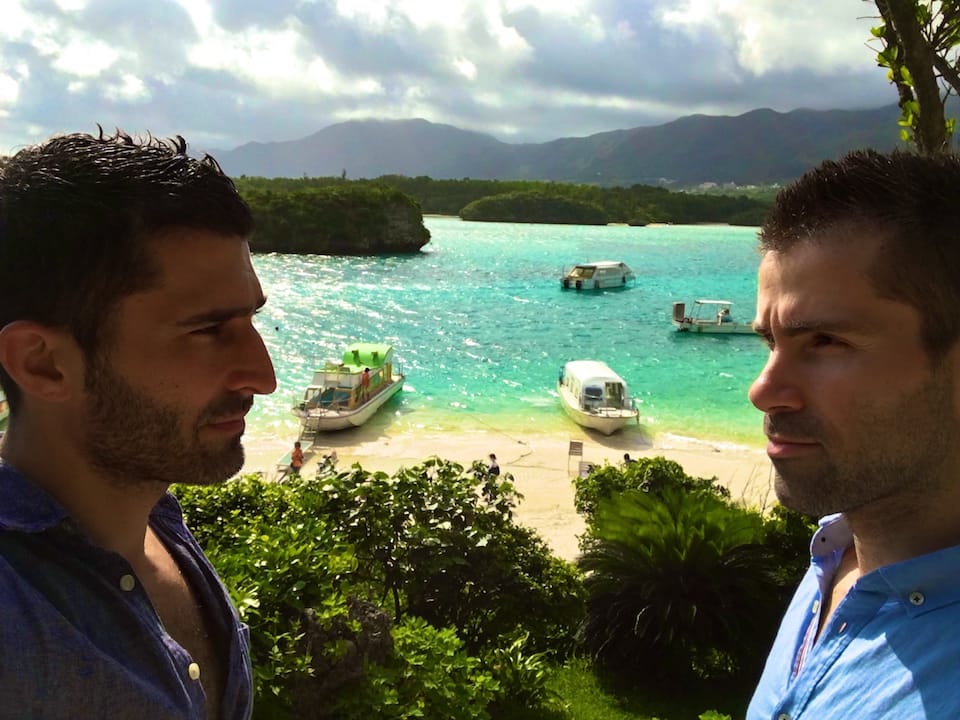 A romantic moment at Kabira Bay

3) Things to do on Taketomi island

Taketomi is a tiny inhabited island, just a few miles southwest of Ishigaki. There’s frequent ferries from Ishigaki, which only take 10-15 minutes so perfect for a fun day trip. The village of Taketomi is crying out to be photographed, with traditional Ryukyu red-tiled one-story houses down the narrow lanes, each lined with white coral walls and the roofs decorated with traditional shiisaa good luck figurines. 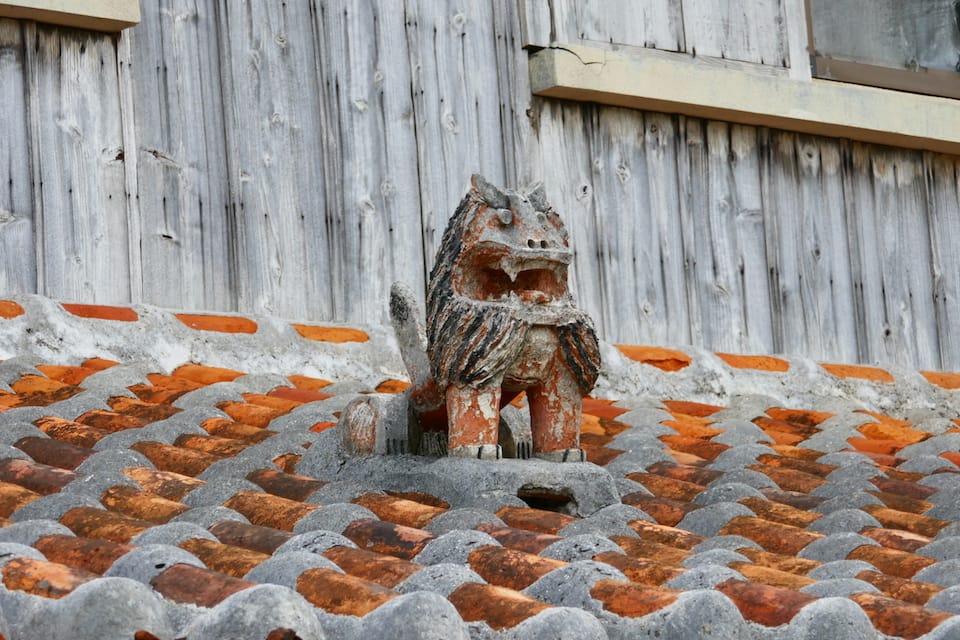 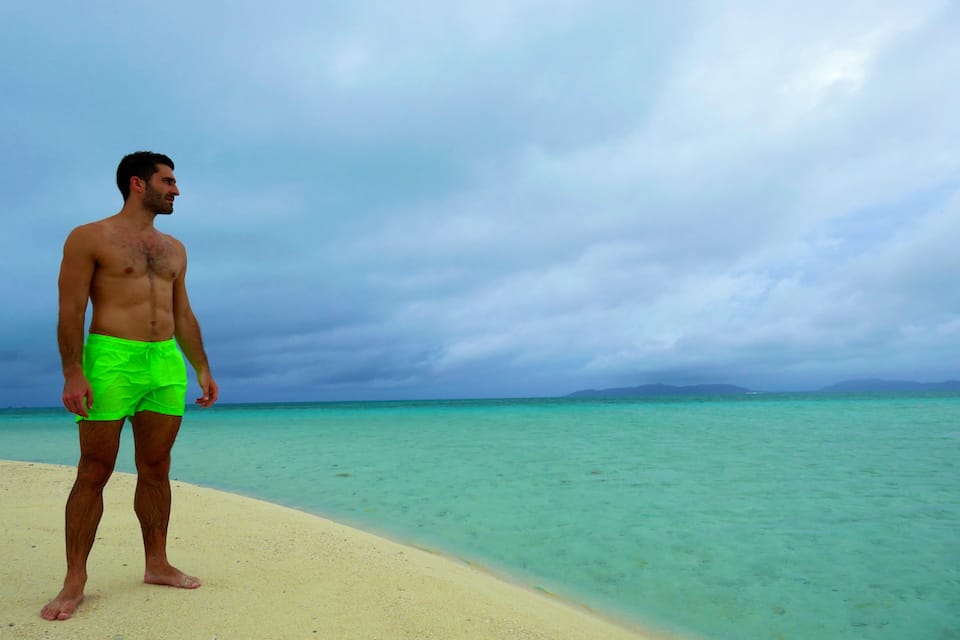 4) Things to do on Iriomote

Iriomote is Japan’s jungle island and THE place to come for those seeking adventure. There’s more nature than people spread across this large island as well as an abundance of wildlife ranging from wild boars to the elusive Iriomote cat. 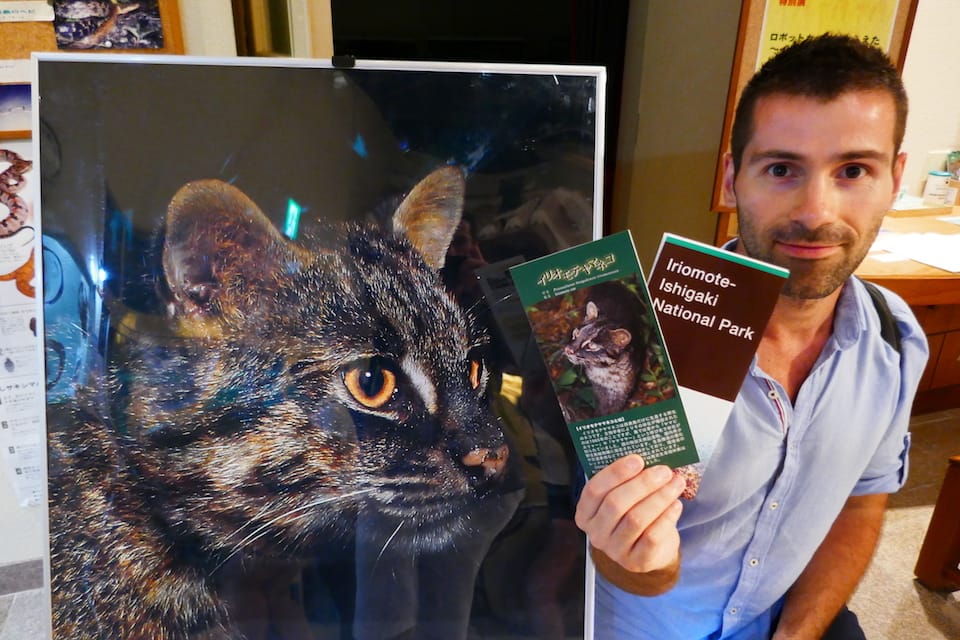 In order to get the most out of your time on Iriomote, we recommend doing a tour with a reputable company like Iriomote Kayak Tour Service who have friendly and attentive English speaking guides.

Some adventure highlights you need to include in your Iriomote itinerary include:

To read more about our experiences in the Yaeyama islands, read our article for Mr Hudson Explores. 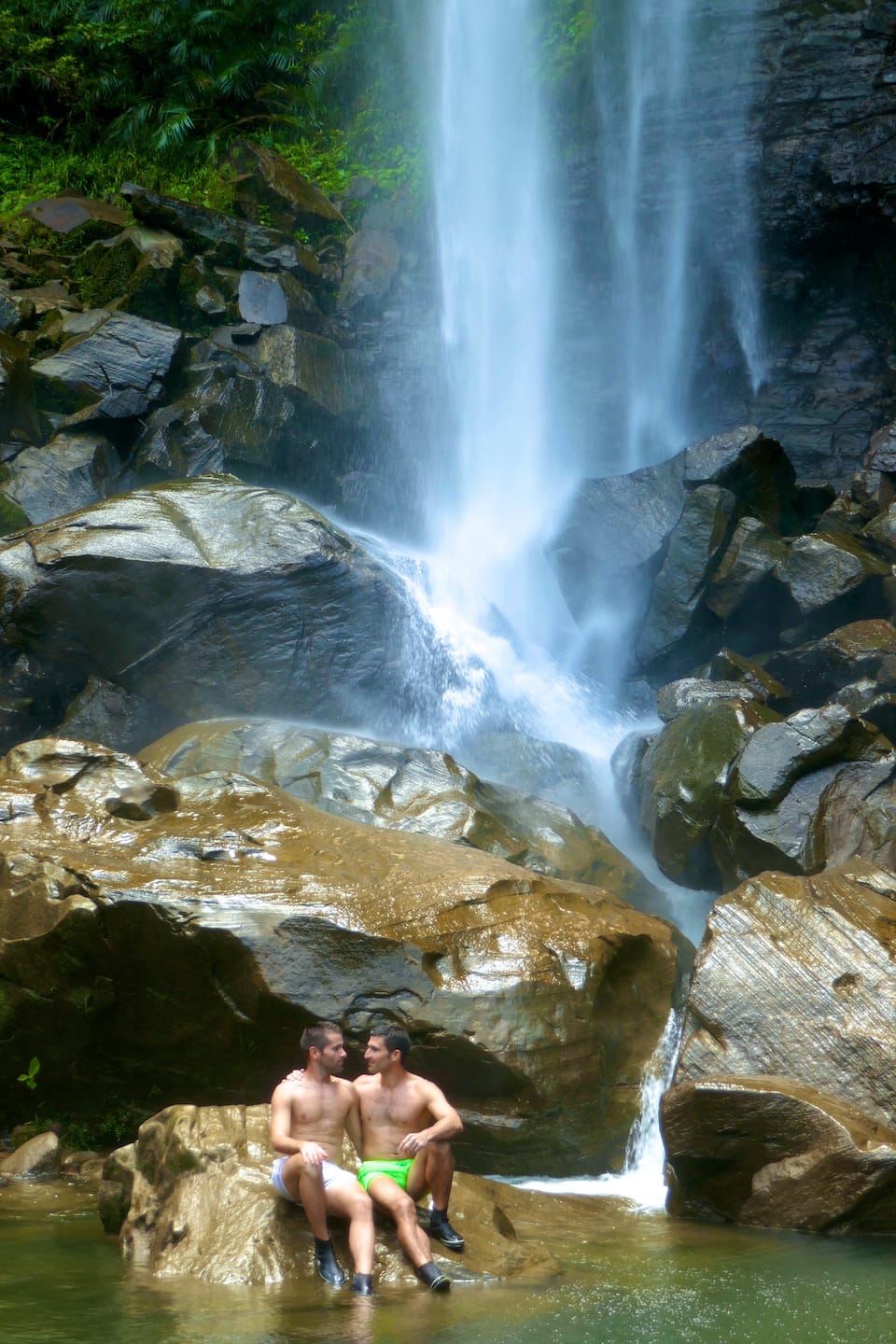 GETTING AROUND THE YAEYAMA ISLANDS

To get into the Yaeyama islands, there are daily direct flights to Ishigaki from both Kyoto and Tokyo airports. For the best deals, we recommend checking on Skyscanner.

To travel between islands, there are daily scheduled ferries to/from each island. Tickets can be bought on the day at the port terminal.